The new $10 banknote entered general circulation on 20 September, and followed the release of the new $5 banknote last year.

The Governor, Philip Lowe, said: ‘The launch of the n 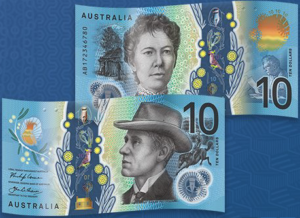 ew $10 banknote is a milestone in our program to deliver Australians banknotes at the cutting edge in terms of security against counterfeiting. I am pleased that from tomorrow people will start to see the new $10 entering their wallets and pockets, and that it continues the tradition of celebrating two of Australia’s most prominent writers.’

The design of the new $10 banknote retains images of Dame Mary Gilmore and AB ‘Banjo’ Paterson and includes elements of their works. It also is the same size and uses the same colour palette as the existing $10 banknote.

Features introduced with the new $5 banknote are also included on the new $10 banknote to protect against counterfeiting and to maintain public confidence in the banknotes. These include the top-to-bottom window that contains multiple interactive elements, a patch with a rolling colour effect, fluorescent ink and raised printing. All banknotes in the new series also include a tactile feature to assist the vision-impaired community.

The $10 banknote will be the first with the signature of Governor Philip Lowe.

While the existing series of banknotes will be progressively withdrawn from circulation, they will retain their legal tender status and can continue to be used.

The new $50 banknote is expected to enter circulation in late 2018. The remaining denominations in the series will be introduced in subsequent years.